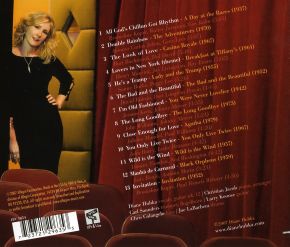 Goes to the movies

Diane Hubka, a vital part of the Los Angeles jazz scene, is joined by the West Coast’s finest musicians in a tribute to Hollywood, featuring both standards and delightful obscurities heard in movies from 1937 through 1979. She won international acclaim when her debut CD, with alto sax legend Lee Konitz, was nominated for a 1999 Jazz Award for Best Recording Debut. Critic Scott Yanow heralded her second CD, Look No Further, as “one of the best in recent times.” She has performed with jazz luminaries including Lee Konitz, Bucky Pizzarelli, Gene Bertoncini, Frank Kimbrough, Bruce Barth, John Hart and Trio da Paz.