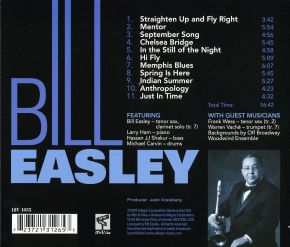 A brilliant and versatile reed player, Bill Easley performs equally forcefully on alto, tenor, and baritone saxes as well as flute, piccolo, and clarinet. Easley is a renowned session player who has worked with Isaac Hayes and done sessions at Stax. He has performed with the Duke Ellington Orchestra, Benny Carter, George Benson, Jimmy Smith, Ruth Brown, Bill Mobley, Victor Gaskin, Mulgrew Miller, Ron Carter, and Grady Tate, among others. Bill Easley has also recorded highly acclaimed sessions as a leader on the Sunnyside, Milestone, and Evidence labels. Business Man’s Bounce is a term Easley first heard as a teenager when playing in his father’s band. It refers to a two-beat feel intended to get even reluctant listeners out onto a club’s dance floor. Pianist Larry Ham, based in New York since 1985, has played with the Lionel Hampton Orchestra and the Illinois Jacquet Big Band. Bassist Hassan JJ Shakur, formerly known as JJ Wiggins, can swing a sick man into good health. He has worked with the Duke Ellington Orchestra since 1974, when he was seventeen. Drummer Michael Carvin is an amazingly prolific drummer who has contributed greatly to the jazz scene. He has played with B.B. King, Freddie Hubbard, Pharoah Sanders, Lonnie Liston Smith, McCoy Tyner, and others, and led his own sessions for Muse and Steeplechase over the past three decades.