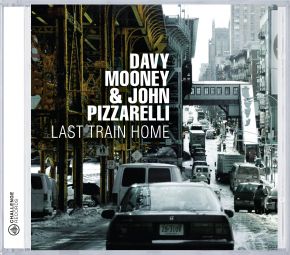 Every once in a very long while a new talent emerges on the jazz scene who seems to have the necessary qualities to become a major player in the field.
Such a talent is the young New Orleans born guitarist Davy Mooney who has the technique, taste, originality and commitment to the music that shines through everything he plays. In September 2005 John Pizzarelli was one of the judges of the Thelonious Monk International Jazz Guitar Competition and Davy was one of the contestants. Davy placed 3rd overall, winning a $5,000 scholarship, but John was sufficiently impressed to make this CD with him - which is a more than eloquent endorsement.
One of the first noticeable things about this CD is the refreshingly un-hackneyed repertoire. Out of the 15 tracks, only 4 could be called “standards”. Take a listen to ‘I’m getting sentimental over you’, played at its’ original fox-trot speed rather than at the slow tempo that Tommy Dorsey’s million selling version popularised. The first solo is by Davy, the second by John and if you know that you’ll have difficulty in sorting out who plays what on the rest of the CD. The remaining three standards are Rodgers and Hart’s ‘I didn’t know what time it was’, the lovely Schwarz/Dietz ‘Alone Together’ and the Alter and Delange favourite ‘Do You Know What It Means to Miss New Orleans’. For the rest, we have a couple of pieces from Pat Metheny, Duke Ellington’s gorgeous ‘Azalea’ (why this hasn’t joined the ranks of the Duke’s great standards is a mystery), Monk’s ‘Ask me now’ - pieces by Jobim, Michel Legrand and Don Grolnick plus a couple of tasty originals ‘Angela’s Sad Song’ and ‘Reckless Blues’, written by Davy and, as a bonus, sung by him too.
What Davy refers to as “John’s never-ending bass line” is the most obvious feature of the driving ‘Last Train Home’, but it’s a measure of the great rapport that exists between these two fine musicians that on all the other tracks where each of them has a solo spot, the other drops into rhythm guitar/accompanist mould absolutely seamlessly.