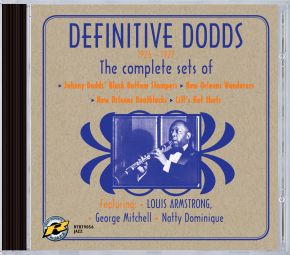 What is there left to say about a figure who stands pre-eminent in the pantheon of jazz clarinettists and who, for some, is the ONLY jazz clarinettist worth mentioning? As noted author James Lincoln Collier stated, “For many listeners Johnny Dodds’ playing epitomizes the New Orleans clarinet style.” Millions of words and scores of books have been written about his soulful, blues-soaked playing, his searing intensity and expressiveness, the seemingly endless inventiveness, his purity of tone, his single-minded dedication to his work (he saw music-making first and foremost as a profession) and exquisite musical taste that was never less than 100%. He was also (along with Sidney Bechet) one of the few New Orleans clarinettists who could match Louis Armstrong’s power and inventiveness and, as such, was a key figure in Armstrong’s celebrated Hot Five and Hot Seven OKeh recordings.

This CD concentrates on one short period of Dodds’ recording career – from the summer of 1926 to the autumn of 1927 - fifteen months that in many ways were the pinnacle of his recorded legacy. Among the titles recorded during this intensely creative period were two issued sides with Lill’s Hot Shots (the Hot Five ‘moonlighting’ for another record company) including an alternate take of Drop That Sack, eight remarkable sides issued as by the New Orleans Wanderers and the New Orleans Bootblacks and eight titles as Johnny Dodds’ Black Bottom Stompers, three of which exist as alternate takes.