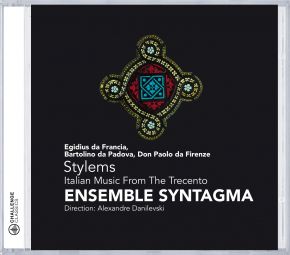 Stylems - Italian Music From The Trecento

Styleme, term used by historians of Byzantine painting for borrowed stylistic elements incorporated in a work of art. The music of the 1300s is attractive for the inventiveness and often exquisite complexity of its melodies. It is a marked departure from the style of the previous 150 years, which were dominated by the French school. One of its remarkable advances was measured notation, a recent invention. To the world of music this was akin to the invention of the wheel: it offers a freedom whose full potential has yet to be exploited. Like the explorers of new worlds, composers embarked on bold adventures. The use of mensuration infinitely enlarges the possible combinations of voices, both vertically and horizontally. The Trecento style is often criticised for being excessively sophisticated, dry and cerebral. And yet, at any rate where its best examples are concerned, it is thoroughly justified for dramatic reasons. Used intelligently and with moderation it creates the very image of objectivity.

As a result of these new perspectives, syllabic word-setting was abandoned: music was no longer there to serve the subtleties of a word or a poetic image, but instead created and pursued its own meaning and nuance. In spite of often quite banal texts, the new music, by and of itself, brings to light hitherto unsuspected facets and depths of feeling. It is worth noting that in De vulgari eloquentia Dante was at the same time developing the notion that music was better served by poetry that was mediocre.