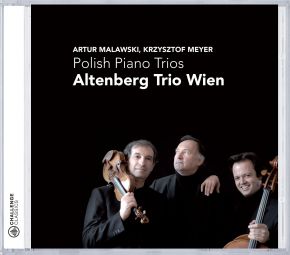 Artur Malawski was known in the years after 1945 as one of the most striking personalities on the Polish music scene – his ballet- pantomime Wierchy (The Mountain Tops, 1950) attained the status of a key work, which manifested the innovative force of a new Poland resurrected from the traumata of war, destruction and the Holocaust.

Despite this, Malawski never seems to have enjoyed the special favour of the “cultural politicians”. Very soon after Malawski’s early death, the succeeding generation of composers blacked-out his renown, and his name appeared only very rarely in concert programmes. There may well have been political reasons for this neglect – a composer whose last symphonic work bore the title Hungaria 1956 must hardly have aroused confidence in the communist powers-that-be. Of Malawski’s numerous pupils the best known is Krzysztof Penderecki.

The piano trio is Malawski’s last chamber music score. In the new edition of the encyclopaedia Die Musik in Geschichte und Gegenwart (Music in History and the Present Age; vol. 11, Kassel) Adam Myrgo’n extols this work as “one of the most remarkable chamber music works in twentieth-century Polish music.” The composition’s significance is also reflected in that it is one of the few works by Malawski to be performed with any regularity.

Krzysztof Meyer is probably the most remarkable child of the music history phenomenon people associate with the name of the festivals “Krakow Music Spring” and “Warsaw Autumn”. And not only because he experienced his first great successes as a composer in both these festivals (1964 with the First Symphony in Krakow and in 1965 with the First String Quartet in Warsaw), but far more because the whole course of his development, his skills as a composer and his artistic creed appear shaped in their essentials by this phenomenon. Meyer is quite aware of the connections that exist between him and the work of his older contemporaries and compatriots: he dedicated his first three “official” string quartets to the three composers who influenced his career (though to very different degrees): Krzysztof Penderecki, Witold Lutosławski and Dmitri Shostakovich. His trio is without doubt one of the most gripping trio compositions of the last decades. Its closeness to the ideas and concepts of Dmitri Shostakovich, above all to his late work, never restricts the free flight of the composer’s original ideas and his visions of sound – on the contrary, the lack of shyness in seeking this closeness allows the uniqueness of the younger composer to emerge with even more freedom and conviction.