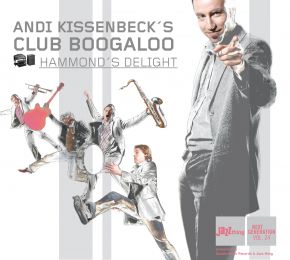 Andreas Kissenbeck – Org | Torsten Goods - gitar, vocals
Lutz Häfner - sax | Andrej Lobanov- trompet | Jean-Paul Höchstädter - drums The „Jazz thing Next Generation“-series, on which Esther Kaiser, Anette von Eichel, Ignaz Dinné, Benjamin Schäfer, Martin Auer, Oktoposse, Cyminology, Christian Krischkowsky, Nadia Maria Fischer, Gary Fuhrmann, Tré, Coustics, Tobi Hofmann, Frederik Köster, HDV-Trio, Jochen Baldes, Tim Rodig, Subtone, Adrian Reiter, Christof May, Lorenz Hargassner, Max Frankl and Jacobien Vlasman have debuted on Double Moon Records, is now being continued, already with Volume 24.„Club Boogaloo“ – the name denotes its significance: organ jazz in the tradition of Lou Donaldson, Lonnie Smith, Joey DeFrancesco and George Benson. The groove is the basis – funk, shuffle, swing and boogaloo. In addition, there are melodies and harmonies from blues, funk, soul and modern jazz. The Hammond B 3 always plays a pivotal role. It is played by Andi Kissenbeck, who teaches at the music colleges of Wurzburg and Munster in addition to his activities as organist and pianist (concerts and tours with Bennie Bailey, Jiggs Wigham and Bobby Shew, among others). His fellow musicians on the other instruments – who also belong to the best and most experienced jazz musicians in Germany – are skilled in playing powerfully without sounding forced. When the fantastic voice of Torsten Goods is added, an unrivaled ambience is created! Goods, known thanks to his successful albums released by ACT, plays above all his guitar, which he also used with a great deal of success playing along with Les Paul, Bob James and Chris Potter. On the other hand, Lutz Häfner is not only in demand as a saxophonist (among others with Maria Schneider’s Jazz Orchestra, Ingrid Jensen and Billy Hart) beyond the borders of Germany, he is also an excellent arranger. Andrej Lobanov – also known to the connoisseurs of the Jazz thing Next Generation series from the band of Krischkowsky – teaches at Leipzig Music College in the meantime and has already played with stars such as Randy Brecker and Dave Brubeck. Jean-Paul Höchstädter, who formally honed his skills in big bands (RIAS Big Band, HR Big Band, NDR Big Band), can often be heard playing with musicians ranging from Tony Lakatos to Till Brönner today.It is not surprising that this group has been working successfully with the young Kissenbeck for years. In addition to unrestrained joy of playing, you sense the will to make music that is not only demanding, but which is also entertaining in the best sense of the word. Pieces by Ornette Coleman, Duke Ellington and others but above all Kissenbeck’s own compositions contribute to combine modern influences and consciousness of tradition. This is not surprising either when you know that he recently published a two-volume compendium on jazz theory at Bärenreiter Publishing House recently. No doubt about it, the man knows what he is doing.