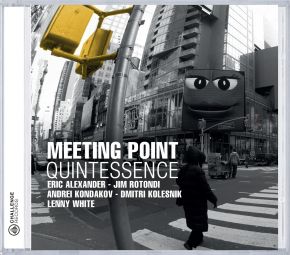 Made under the watchful eye of renowned jazz producer Todd Barkan Quintessence exemplifies the type of jazz that excites New York City club goers every night. The date kicks off with Kondakov’s Secret Mission. The appropriately titled outing, inspired by a James Bond movie, opens with an ominous sounding melody featuring somewhat strident horn harmonies articulated over the composer’s intriguing piano figure anchored by Kolesnik’s strong beat, while being driven by White’s powerfully propulsive drumming. Reminiscent of the exhilarating Jazz Messenger sound of the sixties, replete with electrifying solos from Rotondi, Kondakov and Alexander (in the Hubbard-Walton-Shorter tradition) and a climactic White solo executed over a dark piano vamp, the piece epitomizes the ability to the group’s members to extend the tradition which inspires all of them.

Night City, the second of Kondakov three compositional contributions to the date, his impression of a sleeping metropolis’s deserted streets after dark, is an achingly beautiful ballad that recalls the pathos of Monk’s Ugly Beauty. Alexander and Rotondi’s sounds blend handsomely on the melancholy melody, while Kolesnik’s warm bass and White’s sensitive brushes tastefully accompany the pianist’s delicately articulated solo.