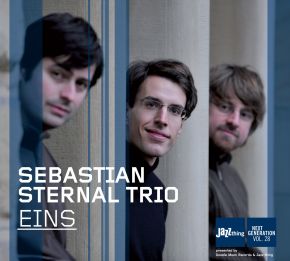 The Sebastian Sternal Trio impresses above all with its fresh, flowing improvisations, which reveal influences of American jazz as well as European classical music and are also adorned with elements of folklore. Role models such as Miles Davis and Herbie Hancock can be heard, but also Claude Debussy even though the trio has found its own sound after many years of playing together. The basis is formed by the sophisticated compositions of Sternal, which captivate you with their atmospheric density and catchy melodies. It is not surprising either if a few songs remind you of film music; Sebastian has already worked as a composer for Bavaria Productions.

"Eins" (trans.: "One"), the first release of the Sebastian Sternal Trio, captivates you thanks to its homogeneous artistic concept, which encompasses composition, improvisation, musical ambience, mood, awareness of space and a lot of feeling for the right timing.