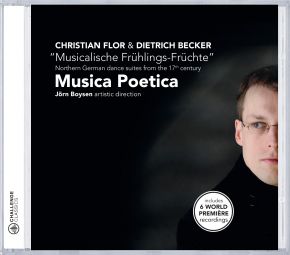 Beckers collection ‘Musicalische Frühlings-Früchte’ was published in 1668 and is dedicated to the city council, who had appointed him to the position of City Capellmeister. Recent research suggests that, not only was Becker one of the most important violinists of his time, but that he was the first composer to use the sequence of Allemande - Courante - Sarabande - Gigue in ensemble suites.

Flor’s Suite in C opens with a Praeludium, a type of written-down improvisation. Short improvised preludes were a means of checking the tuning of the instrument and the quality of its tone, and of loosening the player’s fingers. An unscripted improvisation can be heard on this recording as a prelude to the Suite in G: it is based on a free selection of single dances and an air from Lully’s opera “Roland”.

The Suite in d starts with an Aria instead of an allemande and has no gigue. Every movement has a double, called Variatio in this case.

The ‘Hochzeitlicher Freuden-Klang’ is an occasional work, dated 18 April 1659. According to the front page, Flor composed it for the wedding of his friend Heinrich Elers, preacher at St. Johannis. The piece is a charming combination of instrumental suite with so-called ‘Generalbasslied’ or continuo song. These secular, strophic songs are mostly solos with continuo and instrumental ritornellos and belong to a genre that is typical of the music of Protestant Germany. Flor adds a quick Ballo to the  Allemande – Courante – Sarabande – Gigue sequence and finishes the work with a beautiful slow cadence in which the singer calls on the couple to dance until it is time to go to bed. The Gigue in common time (C) shows the influence of English music, which entered North Germany via Hamburg.

Becker’s collection ‘Musicalische Frühlings-Früchte’ contains sonatas and suites as well as combinations of both forms. Sometimes we find a sonata preceding a suite of dances, thus playing the role of an introduction (e.g. in the Suite in G). This introductory sonata still keeps the Italian sonata form with the combination of slow and fast movements. In other places we find single sonatas which include dances, as in his sonata for 2 violins, violone and continuo, which ends with a quick gigue.

Stylistically, the two Anonymous suites from the Düben collection (Manuscript No.: IMHS 64:13) might be related to one or two different (North) German composers at the end of the 17th or the beginning of the 18th century. Neither suite follows the  Allemande – Courante – Sarabande – Gigue sequence. Both are examples of a category of suites whose formation and disappearance was the direct result of their having been composed for specific occasions – for ballets or related dramatic performances. The first suite opens with a French Ouverture which surprises the listener with a furious bass solo that breaks into the polyphonic middle section. Another typically French feature is the Chaconne at the end, with virtuosic violin solos and shifting rhythmical accents.

The highlight of Suite no. II certainly is the beautiful Tombeau with its deeply expressive lament, performed by the first violin and accompanied by the bow vibrato of the rest of the group. The lament passes into a dance in ¾ which gives an impression of salvation after painful suffering. A chromatic Final(e) ends the Suite.