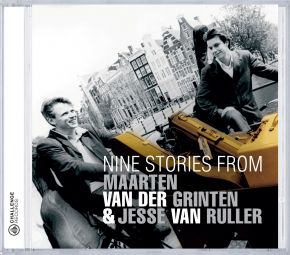 In 1999 two of Holland's leading jazz guitarists met each other several times on stage in a duo setting. From the very beginning it was clear that the complete sound, the clarity of communication and the individual capacities of the two players were making up for a band.
Their first CD underlines the right of existence of this two-men band as it explores the sound range of the combination of two guitars - never losing melodic content.
It is adventurous and yet agreeable and should help the jazz guitar - out of the jazz guitar ghetto - into the ears of all music lovers, not only guitar players.This duo recording is a celebration of Two: Soloing and accompanying is equally divided.
There are two of the most beautiful songs of Cole Porter (You Do Something To Me & Ev’ry Time We Say Goodbye), two gems of Fred Astaire movies (I Won’t Dance & Too Late Now), two acoustic songs for little men (Little Man You’ve Had a busy Day & Angel Fallen Again –for Maarten’s ever falling son), two grooving originals (New Feet & Rul Grint) and a two-in-one blues (Freight Trane & Chi Chi, interwoven).
Each song tells a story of it’s own, nine stories altogether told by Van der Grinten and Van Ruller.