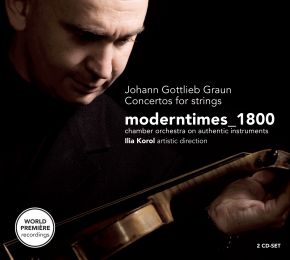 Johann Gottlieb Graun was born in 1701 or 1702 in Wahrenbrück. He studied for several months between 1721 and 1723 with Giuseppe Tartini (1692-1770) in Padua. Tartini had a lasting impression on the young Graun; this can also be heard in his compositions. In 1740 Graun was nominated as concertmaster and conductor at the court-orchestra of Frederick II of Prussia. Graun’s duties included having to scout for new talent for the orchestra, and the direction of the court concerts in Berlin. After the Seven Years’ War, Graun retired from active duty for reasons of health. He died, highly esteemed, on 7 October 1771 in Berlin. Instrumental works utterly dominate the extensive oeuvre of Johann Gottlieb Graun as a composer. It is hardly surprising that among them – besides overtures, symphonies, quartets, trios and wind concertos – he wrote a great number of concertos and solo sonatas for the violin. He composed at least 83 solo concertos, double concertos and several ensemble concertos with solo violin. (A sinfonia for 8 winds & b.c., also performed by Moderntimes_1800, is to be found on CC72193) The concerto by Markus Heinrich Grauel on this CD may be taken as an example of Graun’s influence.