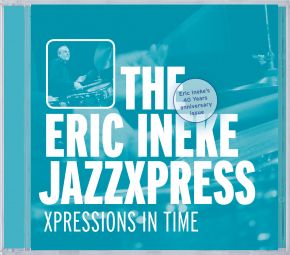 This is the third Daybreak-release of the Eric Ineke Jazz Xpress and celebrates Ineke’s
fortieth year as a fulltime musician and picks up the threads from the band’s first CD
“Flames ‘n’ Fire”, on which Eric coomented:“We did compositions I grew up with, by Herbie Hancock, Chick Corea and Wayne Shorter, and some tunes by band members in the same idiom: hardbop and beyond.”
For the second Daybreak-issue, producer Dubiez suggested the band would delve into the legacy of Ivie Anderson. With some guest soloists – most notably American singer Deborah Brown – the group recorded “For The Love Of Ivie” with their own, updated versions of twelve songs associated with “the best vocalist that ever worked regularly with Duke’s band,” in Ineke’s words.

On this new third CD the quintet plays more fresh arrangements of existing material and some original compositions. The second number, Monk’s all-time classic “ ‘Round Midnight” in a well worked arrangement by Rob van Bavel, gives a splendid example of a good hour of solid new hardbop.