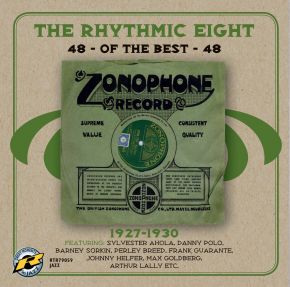 The Rhythmic Eight's leader Bert Firman was commercially minded enough not to wander too far into uncharted territory: his small band would be indubitably hot, but it would still acquiesce to the needs of those who bought records for the simple pleasure of listening or dancing to the latest popular songs. I

Most of the tenor sax and clarinet solos from mid-1928 up to mid-1929 were taken by Johnny Helfer, who, like Sylvester Ahola and Perley Breed, hailed from Massachusetts. Ahola recalled that the New England sidemen had a style that differed from their New York compatriots; in particular, they were concerned with developing a distinctively smooth embouchure. An interesting aspect is that the band never employed the services of a trombonist.
The solos bounce along merrily above a rhythm that is light and uplifting – unusually so for British recordings of the time – and the obvious empathy between the musicians is warm and welcoming. In the imprecise nomenclature of jazz, the style of the band falls into the "hot dance music" category; there are elements of the "chamber jazz" genre typified by Red Nichols and his Five Pennies, and there are also hints of the Frank Trumbauer recordings featuring Bix Beiderbecke, but these aspects do not fully account for the overall structure and approach of the band.

The jazz solos that are so much a feature of the Rhythmic Eight's recordings. We find Arthur Lally, a superb musician whose baritone and bass sax solos have, in the past, been mistaken for the work of Adrian Rollini. Lally was certainly influenced by Rollini, who, as a member of Fred Elizalde's Savoy Hotel band, was yet another American visitor to London in the late 1920s. Tellingly, before the arrival of Rollini, Lally's baritone solos on Firman recordings were rather staccato, but after Rollini's arrival they became more relaxed and legato in style. Lally also contributes some fine alto sax solos on a number of Rhythmic Eight sides: notable examples are to be found in Don't Be Like That, My Troubles Are Over, I Faw Down And Go "Boom!" and Umtcha Umtcha Da Da Da. In addition, Lally sings – though "talks" might be a more apposite description – the second chorus of This Is The Way The Puff-Puff Goes (Johnny Helfer "sings" the first chorus). Who else but the Rhythmic Eight could turn such a trite comedy tune as this into a polished gem?

By the Spring of 1930, the sound of the Rhythmic Eight began to change perceptively. Following the economic slump that hit Great Britain in the early 1930s, there was a general shift towards more straightforward and sentimental renditions of dance numbers, and a consequent move away from the interpolation of jazz solos. In addition, Sylvester Ahola, the Rhythmic Eight's most important soloist, was effectively stymied in early 1930 by a group of British trumpet players (headed by Max Goldberg), who complained through the Musicians' Union that Ahola was a foreigner taking their work.

By 1931, the Rhythmic Eight was virtually indistinguishable from the myriad of other recording studio outfits that turned out the latest dance hits, with the number of hot solos having decreased markedly. The band's last recording session took place in September 1932. Luckily, through these rare Zonophone recordings, we are able to enjoy the Rhythmic Eight at its peak, playing small band jazz – or hot dance music, if you prefer! – of the highest order.