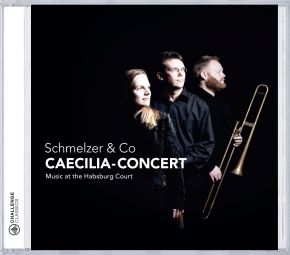 The works included on this CD are among the last, highly virtuosic compositions for these ‘old-fashioned’ instruments, and are the icing on the cake for trombonists, cornetto- and dulcian players. In the 18th century, the leading role of these instruments was taken over by more ‘modern’ instruments such as the baroque oboe, the baroque bassoon, not to mention the violin and cello.

Schmelzer & Co. The meteoric rise to power of the House of Habsburg was mired in the battles, purges, and religious persecution surrounding the Counter-Reformation. In this devout, Jesuit, Counter- Reformist court, music had an important role. This can be seen in the importance and size of the Hofkapelle.

Each individual leader of the House of Habsburg contributed to the musical development of the court in some way. For instance Ferdinand II (1578-1637), a very devout leader who was one of the most resolute backers of the anti-Pro-testant Counter-Reformation, helped secure Vienna’s position as one of the centers of music in Europe after his accession to the Imperial throne. His son, Ferdinand III (1608-57), a great patron of music as well as an amateur composer, was active in employing Italian kapellmeisters such as Antonio Bertali (1605-1669). Leopold I (1640-1705), the second son of Ferdinand III, became head of the Austrian monarchy in 1657, and was crowned Holy Roman Emperor the following year. During his reign, musical life in the Viennese court was expanded. He also composed and was responsible for employing among many others, Johann Heinrich Schmelzer (c.1620/23-1680) and Johann Joseph Fux. (1660- 1741). Josef I (1678-1711), the eldest son of Leopold, was an amateur harpsichordist, singer, and composer.

The recruitment of musicians for the court hofkapelle was often undertaken by important contacts in Italy. During the period 1660-1740, primarily Italians filled the significant posts of hofkapellmeister and vice-hofkapellmeister, for instance Massimiliano Neri, Marco Antonio Ferro and others. The only two natives to hold the post were Schmelzer and Fux Interestingly, the positions of court and church organist were more than not occupied by natives, for instance by Georg Muffat 1653-1704) in Salzburg.

While court composers were naturally occupied with composing music for the Devine Service and courtly events, not all music produced was occasional or of minor significance. In Vienna, there arose a strong tradition of composing in the stile antico. Fux in particular considered it his duty to preserve this older style.