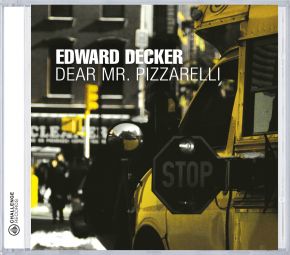 Mary Pizzarelli: "What a surprise to be sitting on the porch one Saturday morning with my father—and Eddie comes over to have us listen to his new CD. He told us that he had decided to lay down some tracks for his birthday and he wanted my father to hear it. We were supposed to play golf altogether, but the clouds rolled in and the skies got darker and darker—so we sat on the porch while it was pitch black outside and started listening to this work of art. I was transformed by the music on our little boom box—and, as I listened, I was so moved by each song and amazed that Eddie did each song by ear. Song after song, I heard a tribute to my father —chord changes and melodies played with such sophistication that you instinctively knew from where they came. It was touching to watch my dad and Eddie, as teacher and pupil ; Eddie wanting some feedback from his teacher. Needless to say, it was a very special moment at our house, and I immediately said to Eddie, “You’ve got to call this ‘Dear Mr. Pizzarelli’ “— because in each song you can hear the virtuosity that was passed along—including the love for just playing beautiful solo-guitar like no other."

Basically, this CD is a tribute to Bucky Pizzarelli's solo guitar playing.  Although none of the arrangements are Bucky's, because they are all Eddie Decker's, they are crafted in the same way Bucky crafts out his guitar solo's. Pizzarelli's virtuosity has indeed passed along to Eddie Decker, including the love for just playing beautiful solo-guitar music.