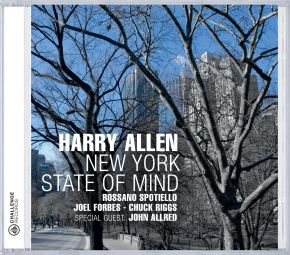 This CD is Harry Allens ode to New York. Starting off with Autumn in New York, he leads us with Broadway Melodies to Chinatown, Down the Depth, Drop Me Off in Harlem, Harlem Nocturne, Manhattan Serenade, of course New York New York, New York State of Mind, Puttin on the Ritz, along the Sidewalks of New York to Washington Square he is finally Well in New York, even without skating in Central Park he portrays the big Apple in 13 wonderful classic ballads eventually going up tempo. His sidemen are more than supportive.

hey Ken, thanks for the sharp eyes!

Hi there,
The spelling of the name of Italian pianist is Rossano Sportiello.Come on guys, please try harder!