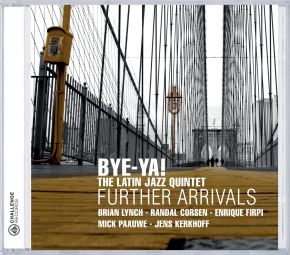 It is always very exciting and challenging for a band to record a new album with a different line up and still maintain the sound of the band. Within the first minutes of recording Bye-Ya was assured that their new setup (with Brian Lynch on trumpet and Enrique Firpi on drums) was perfect to achieve the unique Bye-Ya!-sound, Latin jazz with a strong emphasis on jazz. Further Arrivals consists mostly of original compositions.

The title song ‘Further Arrivals’ is a composition by Brian, played in a very open Guaguanco-style, it is a Latin-jazz theme in ‘Bye-Ya! tradition’.

‘Dance The Way You Want To’, another tune of Brian’s is a funky Cha-Cha, an
homage to the Boogaloo–era.

Descarga #1 is a tune by Mick and is a Cuban style 6/8 descarga.
Another composition of hers is the beautiful ballad ‘Downunder’, played as a Bolero.

‘Mellotone’ and ‘Tranquilidad’ are two Latin-jazz tunes composed by Randal.
‘Tranquilidad’ as the only quartet piece on the album is a piano feature with a beautiful Montuno at the end.