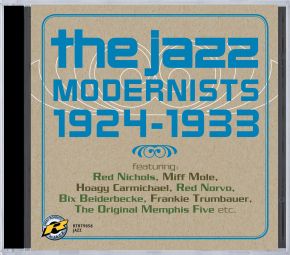 For most general jazzlovers the term ‘modern jazz’ is retrospectively defined – however obstinately or anachronistically - by the postwar revolutions of Charlie Parker, Dizzy Gillespie and Thelonius Monk; all of them more than sixty years old now. So how can there be a collection such as this which delves back yet another twenty years in order to (gloriously) celebrate ‘the Jazz Modernists l924-33’?

Well, if we know that on February 26th l917 the first cacophonous jazz recording - ‘Livery Stable Blues’ and ‘Dixie Jass Band One-Step’ by the Original Dixieland Jazz Band - burst unrepentantly on the public ear, it follows that not only had a new and virile artform launched itself on the world, but that its refinement by a new intellectual generation was both urgent, inevitable and musically seductive too. So that by June l924 Paul Whiteman – an historic champion of Beiderbecke and his contemporaries - had already presented his groundbreaking “Experiment in Modern Music” concert at Aeolian Hall New York; a broad reflection of what was around in American music of the period, including not only jazz sweet and hot, but what might be (gratuitously) called ‘light music’ as well as the premiere of George Gershwin’s ‘Rhapsody in Blue’. And it’s no surprise, therefore, that, at the same time, American jazzmen were drawing on the same contemporary influences to enrich and enlarge their own artistic outputs.

Classical music seemed to have been closer to jazz at this point that its longhair afficionadoes might have been prepared to admit. “But” said Paul Whiteman “ – you’ll never learn to bounce in jazz if you don’t know your Bach and your Beethoven!” And even if it was Ravel, Delius and Debussy who were the men of the day, they certainly provided some of the incidental inspirational sources which l920s jazz musicians brought to their creations. And this was inevitable. Because ten years previously the music of which they would subsequently be historic pioneers had yet to furnish viable artistic premises by existing on record at all!