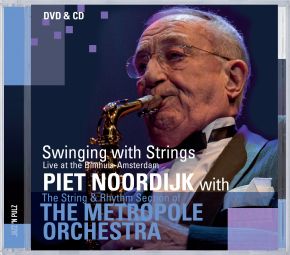 Piet Noordijk has the ability to play jazz in such an unexpected way that he is always recognisable in his work in a way nobody else does. His improvisations never superficial and never dull, are surprisingly lucid. Many great and well known jazz musicians are always willing to play with him.On his 75th birthday Piet Noordijk was invited to play his favourite pieces with the string- and rhythm section of The Metropole Orchestra, the band in which he had been the main alto player for more than a decade. This album is the recording of the live performance of that birthdayconcert at the Bimhuis Amsterdam The Netherlands, both in audio (CD) and video (DVD).

A positive gesture from MCO to the world: Flashmob in The Hague

On the 26th of October, members of the dutch radio orchestra's and the radio choir staged a flashmob at the Hague Central station against the Dutch government plans to scrap the Netherlands Broadcasting Music Center (MCO).In the video below, you can see this great flashmob, a very nice way to protest against the plans.With this spontanious action, MCO also presents their music to the world in a ...