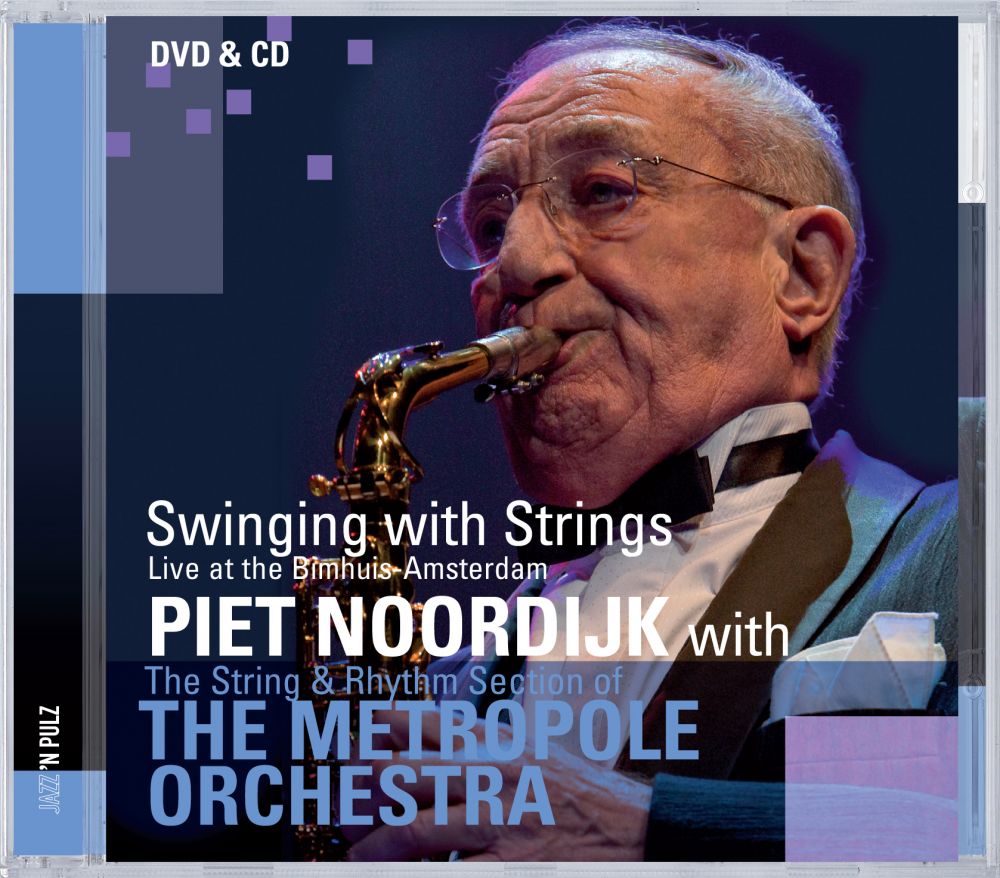 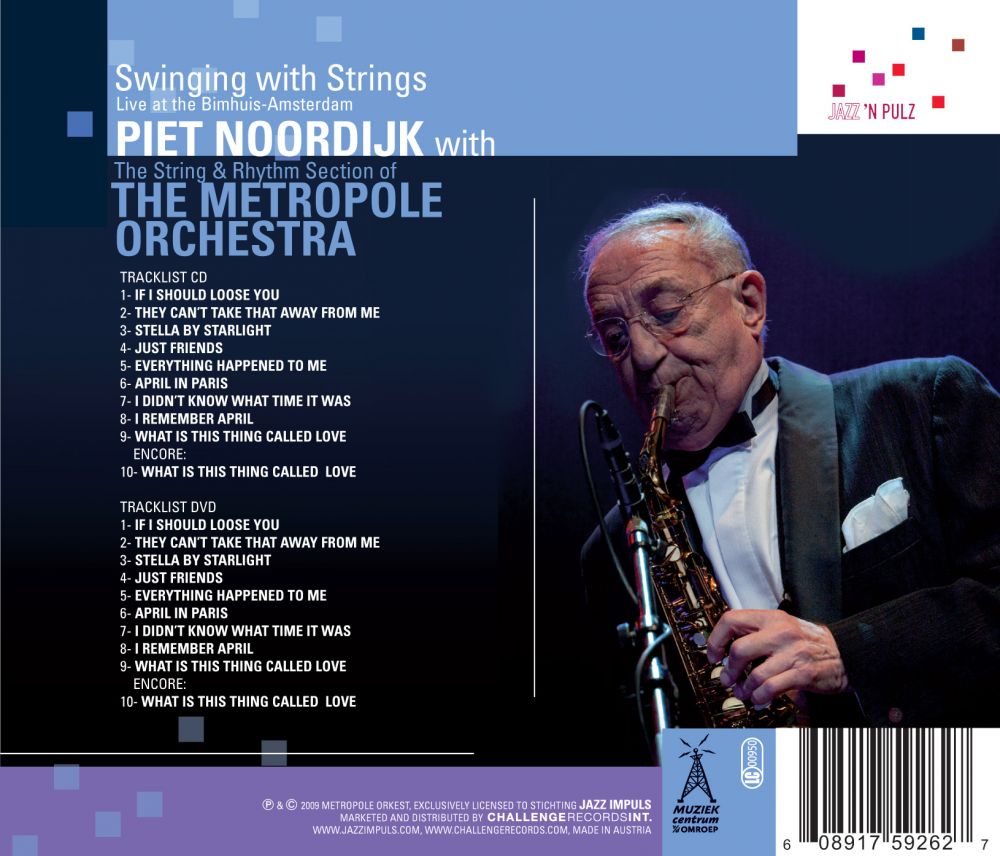 Piet Noordijk has the ability to play jazz in such an unexpected way that he is always recognisable in his work in a way nobody else does. His improvisations never superficial and never dull, are surprisingly lucid. Many great and well known jazz musicians are always willing to play with him.On his 75th birthday Piet Noordijk was invited to play his favourite pieces with the string- and rhythm section of The Metropole Orchestra, the band in which he had been the main alto player for more than a decade. This album is the recording of the live performance of that birthdayconcert at the Bimhuis Amsterdam The Netherlands, both in audio (CD) and video (DVD).

Piet Noordijk studied at the Rotterdam Conservatory between 1950 and 1954. He graduated cum laude on clarinet. On alto saxophone he is self-taught. In the beginning of the Fifties, Noordijk (1932) got hooked on jazz music. His main influence was Charlie Parker. During the second world war by the German occupation it was forbidden to listen to jazz music in public. That didn’t prevent Noordijk’s elderly brothers from playing jazz at home. Music was what kept the Noordijk family going. After the war, Piet started studying the clarinet at the Rotterdam Conservatory. To his disappointment, at that time, there was no possibility to study jazz at the Conservatory. Piet had to wait until the Fifties, when he started playing in nightclubs, with a varied repertoire. He got more and more studio jobs, and ended up working as a studio musician. In the Sixties, Noordijk played with the legendaryMischa Mengelberg/Piet Noordijk Quartet. In 1965 he was awarded the Wessel Ilcken Award, an important jazz award in The Netherlands. In 1978 he became lead alto player with the Metropole Orchestra, and a much sought-after soloist. He played under conductors such as Enrico Morricone, Robert Farnon, Rogier van Otterloo, Jerry van Rooyen, Rob Pronk and Henk Meutgeert. He remained with the orchestra until 1992. He was also a frequent guest with other (television) orchestras like The Skymasters and The Ramblers. During the North Sea Jazz Festival 1987 Piet Noordijk was awarded with the prestigious Bird Award. August 2000 he was a guest at the ‘’Charlie Parker Jazz Festival’’ in New York. In 2008 Piet received the Edison Oeuvre Award. He has played with numerous American musicians such as Thad Jones, Ben Webster, Clark Terry, Ray Brown, Wynton Marsalis, Benny Carter, Dexter Gordon, Lee Konitz, Oliver Nelson, Slide Hampton, Hank Mobley and many, many more.
the Metropole Orchestra has been a name to conjure with in the field of special music projects for more than half a century . At the time of their first radio broadcast, which took place in 1945 after the second world war, the orchestra numbered only 17 musicians. They had been brought together by Dolf van der Linden. Now nearly 65 years later Vince Mendoza is the ChiefConductor of the Metropole Orchestra, a group of 52 musicians who are simply without equal anywhere in the world. They work on commission from the Dutch public networks, making radio and television programmes both at home and abroad. Their field ranges from cabaret, jazz, musicals and pop. Regular highlights of their annual season are live appearances at the North Sea Jazz Festival and the Holland Festival. In the studio they record a large numbers of CD’s. The orchestra is proud of the many successful collaborations it has enjoyed with a huge range of international well known artists as: Charles Aznavour, Burt Bacharach, Shirley Bassey, BobBrookmeyer, Natalie Cole, Céline Dion, Ella Fitzgerald, Stan Getz, Dizzy Gillespie, Herbie Hancock, Hank Jones, Joe Lovano, Bob Mintzer, Oscar Peterson, Toots Thielemans, Mel Tormé, Dionne Warwick, and the Yellowjackets