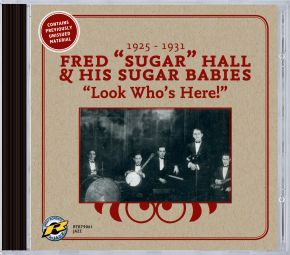 Considering the fact that Fred “Sugar” Hall and his Sugar Babies recorded in excess of 150 titles between 1925 and 1931 there is surprisingly little information to be found on him or his long time partner, Arthur Fields. Quite a few of Hall’s records are of considerable interest as jazz, but he is generally ignored by writers on the subject.We are fortunate, thanks to Mark Berresford, to be able to finish this CD with two previously unknown and unlisted numbers from, what would seem to be the band’s find recording session on 9th September, 1931. Two other titles from this date are known to exist, but, like several of the tracks presented here are mega rarities.

The initial sides of the band are of non-vocal, straight-forward jazz styled material e.g. “Sobbin’ Blues” and “Dallas Blues”. The eight piece band had a standard Dixieland instrumentation of cornet, trombone, clarinet doubling, alto sax, banjo, piano, brass bass and drums plus a violin. After a couple of years with no known recordings the band returned to OKeh with a new front-line, though the rhythm section remained unchanged, and the addition of Arthur Fields’ vocals.

why has the cd not got 'plenty of sunshine'-the best record they ever made and an absolute classic of hot jazz??? Tim