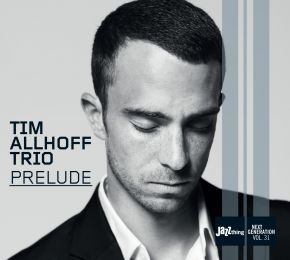 The seventh year of the successful series "Jazz thing Next Generation" is starting with an extraordinary piano trio. Tim Allhoff, born in Augsburg in 1980, already started playing piano – self-taught – as a child, had the benefit of classical piano lessons later and then studied jazz piano at the Richard-Strauss Conservatory in Munich. He graduated with "magna cum laude" in 2007. The fact that he is a sideman much in demand in southern Germany goes without saying. But he does not limit himself to that, because he is much too busy, curious and ambitious. On one hand, he works as director of music at Ingolstadt Theater, and on the other hand he has his own trio, which has been in existence for about two years. And he found the ideal environment in it for his playing, which you could hear in his classical education and his admiration for Brad Mehldau if Tim had not already found his very own way to express his talent for music. Of course, the experience of collaboration with artists such as Larry Grenadier and Jeff Ballard helped him to do this. But his associates in his Tim Allhoff Trio are two young men, who are really among the best that Germany's jazz scene has to offer.   Andreas Kurz plays bass and already studied with Allhoff in Munich. He also studied in New York and provided a solid basis in several known bands from "Enders Room" to the bands of Peter O´Maras and Nicolas Simions as well as in his own quartet. The unusually melody-conscious double-bass player is an ideal team player, who not only accompanies but also set numerous accents of his own.   On the other hand, Bastian Jütte is a drummer who has drummed up such a good reputation that he can chose the groups in which he plays. When you listen to his intuitive and sensitive accompaniment, you know why he has already played with Vincent Herring, Bobby Shew and Michael Wollny. The percussion does not hide anything here, but instead the details and valuable sounds of his co-musicians are emphasized by it.   The program is composed mainly of original compositions, supplemented by two standards and the title song "Don´t Speak", the great hit song by "No Doubt" from 1995 in a version really worth hearing.   "A musical community, acting as finely as energetically, as communicatively attentive as obstinately eloquent. A dream team..." (Ralf Dombrowski)