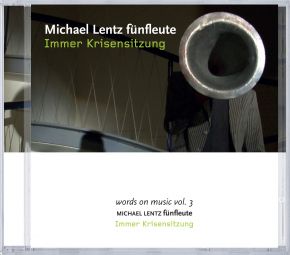 The combination of jazz and poetry has had a good tradition since the time of the American Beat poets. There is also a German language version, for example, with the crossover experiments of Ernst Jandl and Peter Rühmkorf. The fact that the writer and poet Michael Lentz has concerned himself with this tradition already becomes clear with his two-volume dissertation of more 1,000 pages about oral poetry But he has also been performing successfully with his band Sprechakte Xtreme for years to manage the heritage of his predecessors himself. His band with the new name "Michael Lentz fünfleute" (but the members has mostly remained the same) has been performing since 2010. His latest work with love poems is being published parallel in Fischer Verlag: "Offene Unruh. 100 Liebesgedichte" (Frankfurt: S. Fischer Verlag 2010). He set 14 of these poems to music with "fünfleute": genuine poems in sound. Michael Lentz was born in Düren in 1964 and lives in Berlin today. He is one of the most well known German-language authors and has been distinguished with numerous prizes (among others, Ingeborg-Bachmann Prize, Sponsorship Prize of BDI, Prize of Literature Publishers). He is not only a gifted poet, but also a novelist and playwright and his recitals with voice and alto sax are outstanding. The other four members of the "fünfleute" band are Axel Kühn on saxophone, bass clarinet, flute and various technical supplements, Oliver Hahn on piano, Rhodes and minimoog, Klaus Sperber on bass and Andi Lind on drums. Axel Kühn is solid member of the German music scene and has played with almost everybody from Lalo Schifrin to Udo Lindenberg, from Torsten Goods to Peter Kraus, and from Till Brönner to Helen Schneider. This unusually large treasure of experience is not only the basis for his precise playing, but also for his ability to intertwine the poems of Lentz with congenial compositions. Oliver Hahn can also point to a very varied career as keyboard specialist for others from Robben Ford to Peter Erskine, on Gottschalk's "Late Night Show" and for Lisa Fitz. Klaus Sperber worked with Ina Deter, produced numerous albums (among others, by Nina Hagen), and Andi Lind is the drummer in the current band of Jasmin Tabatabai as well as in "Freaky Fukin Weirdoz". "Jazz poetry is catapulted into the twenty-first century," the newspaper Frankfurter Allgemeine reported.