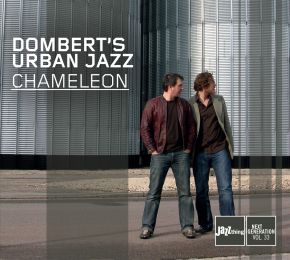 Actually, nothing could go wrong: an acoustic guitar in the hands of a master meets the comprehensive electronic switches of a sound magician. As a result, the core of a band was formed, which did not create the term "urban jazz", but can define it. Andreas Dombert recorded a puristic jazz guitar album with Helmut Kagerer after studying under him. As many artists in the "Jazz thing Next Generation", he was also a member of the Federal Jazz Orchestra (2 years). But he became known in jazz circles thanks to his work with the band "Panzerballet" and also above all as guitarist in the very successful pop music band of Claudia Koreck in 2009. Peter Sandner is a master of sounds and noises, but works with his electronic ideas like a jazz musician; they are designed in such a way that you can also improvise with them or parallel to them. An aesthetics of music is created, which is contemporary, urban, avant-garde and at the same time reflects a feeling of life that is everywhere.   The other band members are also extremely skilled without a doubt. Lutz Häfner is an established tenor saxophonist, who has played with numerous well known musicians from Albert Mangelsdorff to Till Brönner - a "played with" list would simply be too long - and has a few much admired CD releases of his own. He contributes his multifaceted playing and steamy solos masterly into the band sound. Markus Schieferdecker is a bassist from the premier league, who recently recorded a CD with Kevin Hays and Bill Stewart. And the drummer is well known too; Sebastian Lanser also worked with "Panzerballett" and works on projects with the internationally known and successful percussionist Martin Grubinger.   The consolidated skills of the band take characteristics from very different musical landscapes here: from blues to electronic avant-garde, from metal rock to hip hop, from modern jazz to pop. This is not at all to create a a hybrid from adjacent genres, but instead to create a merger of ingredients from the dialog of acoustic and electronic instruments to form a new, vital whole.   "The way in which Dombert and his musician partners use electronics - or simply "urban sounds" - is exciting and demonstrates an extreme degree of sensitivity." (Roland Spiegel, BR)