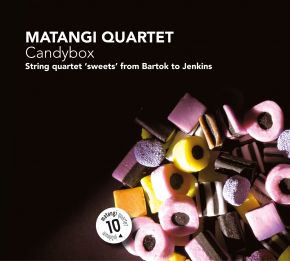 A luxurious Anniversary-candybox with different musical sweets. The music fits the quartet like a glove and with it the quartet celebrates that already for 10 years it is an important, fully professional and full time stringquartet. The box has divers, challenging and delightful music. Just like a heavenly tasting candybox should be: delicious! This music shows exactly how multifaced the Matangi Quartet is.

The gritty humour, momentum and irony in this arrangementby Sándor Devich (second violinist of the renowned Bartók Quartet) give the impression that Shostakovich was somewhere nearby, but when Bartók wrote these notes, in May 1908, Dmitri Dmitrievich was not yet 2 years old!

For five movements, enkins lets us grabble freely in a candy box of the most divergent types of music, fluttering from folk-like fiddle to baroque beat, minimal and tango.

In the Dutch new music world, Chiel Meijering is the craftsman who composes at lightning speed and time and again opens the door to the liberating beats of pop culture. Meijering drags anything from there that is quick, supple, exciting and hot into Caixa de Dolços, the Matangis acoustical playground.

The Eastern European composerVladimir Godár, from Bratislava, is renowned as a film composer and often named in a single breath with his spiritual predecessors Arvo Pärt and Henryk Gorecki. But he has more skills than just swinging the censer. In Godár’s Concerto Grosso for 12 strings and  harpsichord, there’s a daredevil presto, for instance. Foot-stamping  neo-Baroque.

In Música de Feria, Silvestre Revueltas brings total abandon and surprising  twists. Dictatorship, revolution, civil war and revolutionary leaders, several of whom died prematurely, murdered: Revueltas experienced it all, as can be heard in the impetuous outer movements. What comes between is like an acid full of soft and pure fruit extract, for at the fair (feria), the heart of the Mexican nation beats with warm-blooded folklore.

One day Dvorak's pubescent daughter caught Josef Suk's eye. Suk, at a ripe age, married Otilka Dvonákova, but a heart condition soon took his muse  away. After, Suk became more introspective. In this meditation from 1914, Suk looks for consolation in an old Bohemian chorale, Svatý Václave.

A sultry atmosphere rises from the Serenata by Joaquín Turina Pérez, who was born in Seville and was a friend of De Falla. We come upon the pianist, composer and music journalist shortly after his pen was temporarily silenced by the Spanish Civil War. 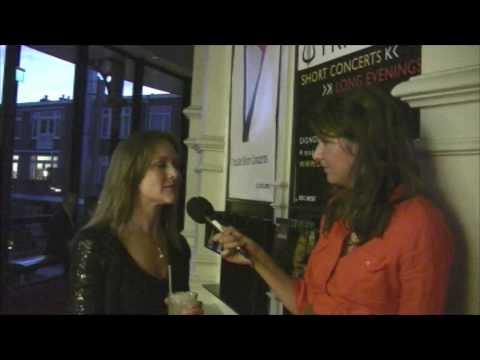