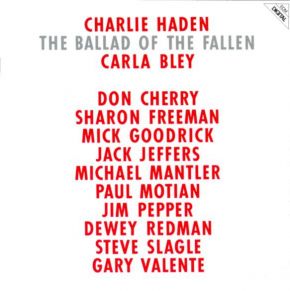 The Ballad Of The Fallen

Charlie Haden’s Ballad of the Fallen, recorded in 1982, continued the work of the Liberation Music Orchestra, begun in the 1960s. With Carla Bley as pianist-arranger and a line-up including Don Cherry, Dewey Redman, Michael Mantler, Mick Goodrick and Paul Motian, the orchestra reconvened to protest human rights violations and Reagan-era US meddling in political struggles in South and Central America. Songs from the Spanish Civil War beautifully arranged by Bley, and originals by Carla and Charlie distinguish a powerful recording that was voted Jazz Album of the Year in the DownBeat Critics Poll in 1984.

Jubelende pers over Live at Birdland