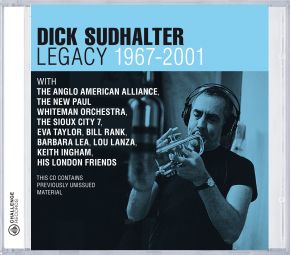 Intense and full of spirit, this CD with the legacy of Dick Sudhalter, between the years 1967-2001.

"I had already met Dick Sudhalter and Henry Francis at Alan Leat’s little jazz club in the Old Brompton Road and been impressed by Henry’s stride pianistics and Dick’s Bixian sound, so when Laurie Wright, editor of “Storyville” magazine, rang me and suggested that I should get a band together to welcome the two to London at a gig that he would arrange at an East End pub called The Lord Rookwood I was nothing loth and promptly contacted my friend and EMI colleague Nevil Skrimshire, he of the rock-steady swinging guitar. Together we rounded up John R.T. Davies, Keith Nichols and Alan Cooper and from these informal beginnings a band was born." - Chris Ellis in the linernotes of the CD Dick Sudhalter - Legacy 1967-2001 and it gives a bit of a clue what can be found on this beautiful and very nostalgic CD!

“Was it the players, each a vivid, one of character with dimensions
extending quite beyond the here-and-now of music-making? Was it their feeling for history, cross-fertilizing a record collector’s curiosity with the expansive, share-the-wealth magnanimousness of the professional  jazzmen? Or was it nothing more or less than the sense of camaraderie radiating from them as they bade me welcome? Damned if I know. But it felt good, and still does. We met to rehearse, to argue, drink innumerable cups of muddy tea (the milk goes in first, Dad!), every Tuesday evening. The music we made had lift, humour, lightness of spirit. Above all, joy”. Dick Sudhalter

Tracks 1 to 14 are previously unissued, except tracks 4 and 5,
which were issued only as semi-private limited editions by John R.T. Davies.