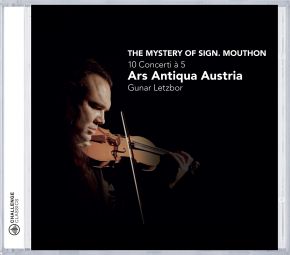 It is not sure if lutenist Mouton and composer Mouthon where the same people. What we do know is that this music from the 17th century is unknown music from Austria, played by the early music specialist ensemble Ars Antique Austria (a group of musicians that plays music from the wealth of pieces that has been handed over to us from Austria and which is now uncovered bit by bit). This is enchanting music, a richness uncovered!

Charles Mouton was born in 1626 and died around 1699. ...What  strikes us about Mouthon as astoundingly modern and actually indicative  of a much later period are his melodies. They recall Handel, not only as  regards the musical figures, but there are also similarities in the  rarefied harmonies and the frequently schematic formation of the  cadences. The collection not only shows the astonishingly high standard  of musical culture in Austrian monasteries at the turn of the century,  it also underscores the melting-pot character of the cultural attitude  shared by Austrian cultural sponsors and patrons. By combining elements  from the most diverse cultures they fostered the progress that led to  the international Wiener Klassik - Viennese Classicism. We invite you to  form an opinion whether this work is part of the collection of the  lutenist of the 17th century Charles Mouton, whether it concerns  another up to now unknown composer with the name Mouthon or whether  the writing up is simply faulty." (Gunar Letzbor in the linernotes)

Franco Pavan, in the liner notes to his recording of Mouton's lute pieces
(E Lucevan Le Stelle EL082326), writes 'Charles Mouton was born in Paris in January 1617: he was actually baptised on the 21st of the month at Saint-Jacques de la Boucherie.'; see http://www.elucevanlestelle.com/allrecords/le_mouton_graphics/booklet_mouton.pdf
Ars Antiqua's playing is absolutely splendid; the music itself reminds me of Torelli's Op.6 (1698).