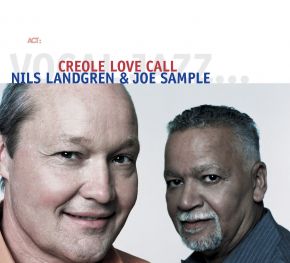 The man with the red trombone is always on the look out for new challenges. This is what has made Nils Landgren one of the most creative, many-sided and also most successful artists to be currently found in the European jazz scene. Since 1994 he has been under contract to the ACT Label from Munich, releasing over this period 12 albums in his own name. Seven have received the golden German Jazz Award, with two even going platinum! Meanwhile, his role as producer of Swedish singers Rigmor Gustafsson and Viktoria Tolstoy has brought him two further gold awards.

With "Mr Redhorn" Nils Landgren, who "for a long time has been at the forefront of European jazz trombonists" (Spiegel), you don't only associate the frenetic celebrated concerts of his groovy Funk Unit, which has been ceaselessly on the road for the past year with the successful project FUNKY ABBA (ACT 9430-2). You also know him from his intimate duos with Esbjörn Svensson where they would rework Swedish folk songs, from his chamber concerts of religious music or from his collaborations with big bands.

One first came across Nils Landgren as the sensitive interpreter of ballads on his 1999 album Ballads (ACT 9269-2) from which can be appreciated his gentle and touching voice and "hypnotic charm" (Frankfurter Allgemeine Zeitung). Following this he released his platinum disc Sentimental Journey (ACT 9409-2) and produced the exceptionally successful album I Will Wait For You (ACT 9418-2) by Rigmor Gustafsson. In 2005 the journey has now taken him to the southern states of USA, leading him to New Orleans.

There are many reasons for this. Karl-Erik Landgren would habitually tell his young son: "Listen to this music, it’s the real stuff", whenever he took up his cornet to rehearse the swinging tunes from the New Orleans era with his band or played his shellac discs. The enthusiasm spread from father to son and the fascination for the sounds and rhythms of the cradle of jazz was passed on to the young Nils. It was a lifelong dream of his father to set foot in the hometown of jazz at least once in his life. Nils made the journey in his place in spring 2005, in order to realise a project devoted to the music of the American South. A project that could only be recorded in one town and with one man in particular: in New Orleans and with Joe Sample: Creole Love Call.

Born in Houston, Texas, Joe Sample grew up exposed to the usual Southern mix of jazz, blues and gospel. He is known above all as a founder member, pianist, keyboardist and composer of the legendary funk jazz band The Crusaders, with which he wrote musical history over the decades. So many of his songs became worldwide hits, such as "Street Life" sung by Randy Crawford in 1979. Many of these can be rediscovered on Creole Love Call. Since the late Seventies, Joe Sample has also followed a parallel career as solo pianist and accompanied stars such as Marvin Gaye, Tina Turner, B.B. King, Eric Clapton and Joe Cocker on numerous albums and tours.

Nils Landgren and Joe Sample have known each other for at least 20 years, from when Nils accidentally found himself in the middle of a recording session of The Crusaders in Los Angeles and then played together with Randy Crawford in Santa Barbara the following summer. Years later, after three of the original Crusaders got back together in 2003, Joe Sample invited Nils at the beginning of 2005 to join him on a major Japan tour - and thus Creole Love Call was sealed with a simple handshake.

The band which Nils and Joe specially put together for this album mainly consists of musicians from New Orleans. With a famous exception: the pop and soul star Ray Parker Jr., especially known for the title song for the Ivan Reitman film "Ghostbusters" (1984). Here he plays guitar and duets with Nils Landgren on the Otis Redding hit "Dock Of The Bay". The rhythm section includes bassist Chris Severin, who is known amongst others from many Dianne Reeves albums, Raymond Weber (drums), and Lenny Castro (percussion). Weber was in the 90s a member of Harry Connick Jr.'s Big Band and is to be seen on screen in the film "Ray" as the drummer in the band of Ray Charles. The busy percussionist Lenny Castro has worked together with greats such as Al Jarreau, Stevie Wonder, Barbra Streisand, Ricky Lee Jones, Diana Ross and Quincy Jones, and is also known for work with Joe Sample and The Crusaders.

Charmaine Neville, a member of the famous Neville Brothers clan, appears as "special guest", interpreting with Nils Landgren Allen Toussaint's classic "With You In Mind", which lyrics are written by her uncle Aaron Neville. Also appearing on Creole Love Call is one of New Orleans' most famous musicians, the sousaphone player Kirk Joseph, arguably the most important and most creative innovator of his instrument. Together with trombonist "Big Sam" Sammie Williams, leader of the New Orleans funk band "Big Sam's Funky Nation", he is a member of the legendary New Orleans' Dirty Dozen Brass Band.

The recordings for Creole Love Call took place in May 2005 at Piety Street Studio in downtown New Orleans, where musicians such as The Neville Brothers, Ryan Adams, Dr. John, Lenny Kravitz and Alanis Morissette have previously recorded.