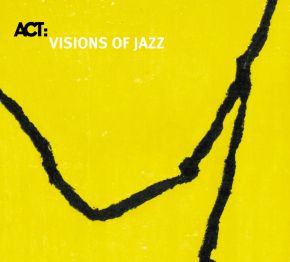 The nose, the sky and the instant

The new ACT-sampler “Visions Of Jazz”: 15 acoustic justifications for associating more with jazz than just the notes.

Music - and jazz especially - should be constantly moving and changing, both itself and the listener. It should be communicative and open to the world, speak through the music and say more than the notes that carry it. This is part of the philosophy behind the ACT-label from Munich that was founded in 1992. One of ACT’s main goals is the support of young artists, artists that each have their unique sensibilities and a mind of their own. Musicians with a vision. And largely musicians from Europe, as jazz from the old world has developed an astonishing creativity in the last decades, a fact which is being recognized more and more even in the US – as the success of the ACT-artists “e.s.t.” shows.

Thus the compilation of 15 current recordings is named “Visions Of Jazz”. The assortment of tracks it contains is a fruit of label-boss Siegfried Loch’s own vision: To create an aesthetically meaningful multiplicity from the work of a multitude of strong individuals. To name but a few – the rough eruptions of saxophonist Heinz Sauer and pianist Michael Wollny, the slow, hypnotic singing of Solveig Slettahjell, the grooving sonic explorations of “e.s.t.”, Wolfgang Haffner’s enchantingly simple melodies over an electronic background, Michael Schiefel’s eccentric vocal pyrotechnics, Helge Sunde’s orchestral multi-dimensionality, the rhythmically vibrant, Balkan-flavoured music of the Alboran Trio and the focused energy of Eric Watson; a wide spectrum.

A word about the visions behind it all: “Jazz is just a four letter word,” is a famous quote attributed to Miles Davis. Frank Zappa said the music by that name “(is not dead, it just) “smells funny”, and Theodor W. Adorno vilified (what he considered to be) jazz as an inflexible fashion that lacks a utopian vision. But Miles Davis also said “I’ll play it first and tell you what it is later.” And this is a motto that was put into practice by the musicians featured on this CD, who not only provided their music, but also some thoughts about that very music. They range from the observation, that jazz unifies “movement and infinity” to the succinct statement that “all there is to envision exists here and now”. The quintessential point: Any single note that was conceived on the spur of the moment can contain a universe in itself. The recordings on this CD confirm this statement in the most varied manner conceivable. And the supplied statements show that jazz does indeed have a utopian vision, that the scent of jazz may be strange, but also rather exciting, and that this music is one of the most vibrant things the 21st century has to offer. We hope you enjoy reading and verifying!