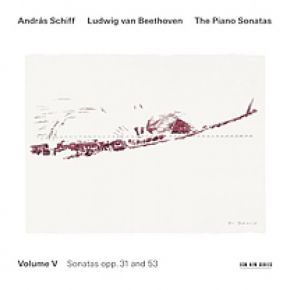 Volume V of András Schiff’s highly-acclaimed Beethoven cycle in chronological order includes four masterworks from the so called “middle” period on two CDs: The three sonatas of opus 31, written in 1801-02 shortly before the Eroica symphony, display varied characters, the first one being humorous and the second more dramatic, whereas the third sonata is tender and lyrical in the two initial, exuberant in the last two movements. The famous “Waldstein” sonata is a virtuosic highlight of Beethoven’s complete oeuvre with most extraordinary sonic inventions which betray an almost symphonic ambition.