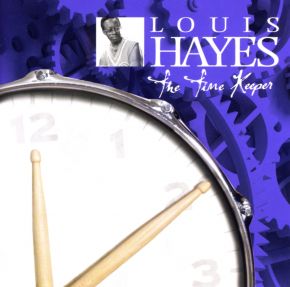 Louis Hayes’ debut release for 18th & Vine finds him charting new territories in rhythm & groove and swinging harder than ever. There is no introduction required for Louis Hayes, a legendary jazz drummer who for over 50 years has been putting his unique stamp on the world of jazz drumming, one post-bop polyrhythmic beat at a time. Hayes lives in the present and continues to write new and exciting chapters in the pages of modern jazz drumming Legendary and massively infl uential jazz drummer and architect of hard-bop and post-bop swing styles. Founder and leader of the Cannonball Adderley Legacy Band.For the last 20 years, Hayes has led/co-led some of the most uncompromisingly swinging groups in all of jazz. He has performed with Cannonball & Nat Adderley, John Coltrane, Kenny Burrell, Freddie Hubbard, Bobby Timmons, Hank Mobley, Booker Little, Tommy Flanagan, Cecil Taylor, McCoy Tyner, Ray Brown, Joe Henderson, Gary Bartz, Tony Williams, and Dexter Gordon.