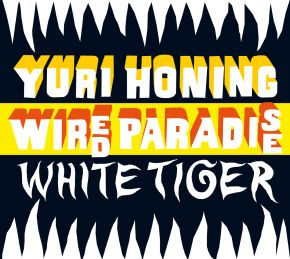 Since 2006 Honing and his electric band Wired Paradise are conquering the world with electronics, rock and jazz in a spectacular mix where Honing’s saxophone seems to represent the vocal part of many songs. ‘White Tiger’ is recorded during their 2009 world tour and proves the band to be a stunning live act. The album is inspired by Aravind Adiga’s prizewinning novel ‘The White Tiger’.

As a blueprint of Indian society Adiga’s novel overwhelmed Honing completely, who has been touring India for many years. Also, an important part of this album was recorded during Honing’s last concert in Mumbai, India, in 2009.

Yuri Honing is Europe’s most remarkable saxophonist with a broad mind and with very little prejudice. He was the first jazz musician ever to record a complete album solely with pop songs (‘Star Tracks’, 1996) that caused a stir in both Germany and the U.K. Ever since he toured the world presenting his groups on all major jazz festivals. Honing played and recorded with jazz greats as Pat Metheny, Charlie Haden, Paul Bley, Gary Peacock, Paul Motion and many others.