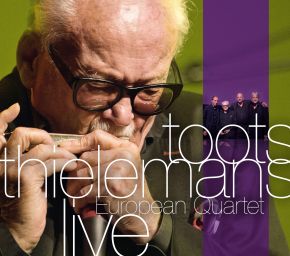 The band with Toots, Karel Boehlee, Hans van Oosterhout and Hein Van de Geyn, exists for many years now and there are concerts in many places. Then there was the tour in Holland in 2006. Many theaters, many great audiences that always embraced us with so much warmth. Chris Weeda, the sound engineer, was the fifth member of the band. Always making the music sound warm, full, generous - and recording many of the performances. The music was strong, confident, full of life and vibrancy. Toots played so well, everyone played well. There were more concerts the years after and Chris and Hein Van de Geyn found themselves with a wealth of recorded material.

This is an album so representative of Toots' live performances, an album that captured the joy, the risks and interaction; an album that captivates the majestic melodies, the singing of a man that lived such a life filled with music and emotion.

The wise old man, with the spirit of a teenager. The delicate balance between the introspective and the exuberant - always giving, always with the desire to communicate - communicate to the fellow musicians, communicate to the listener. In Toots words: “Between a smile and a tear...” these sublime live-recordings taken from concerts of Toots Thielemans with his quartet.

That's NO reason why Hans should not be mentioned as one of the performing artists.

Hans van Oosterhout is a musician who does not have a cd as a bandleader on Challenge, that is why he is not in the Challenge-artist list

Toots Thielemans (artist)More information
09-09-2013 Jazzflits
""This time no endless anecdote-tes from his rich career, but at a punishing pace he left his companions  behind to single-handedly finish with 'My funny valentine' without them""