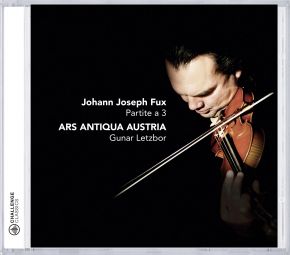 When choosing the selection for our first CD with music by Fux, we came to the conclusion that we would under no circumstances play the church sonatas. They were primarily composed for the Court Chapel, the Hofkapelle, where the music was scored for an exceptionally large ensemble. The choral violins were supported by organ, cello, double bass and bassoon in continuo. ARS ANTIQUA AUSTRIA is first and foremost a chamber ensemble and seldom plays in a larger formation. Our strength lies rather in ensemble music scored for soloists. Thus the partitas positively thrust themselves into our attention. They were composed for the chamber and widely known outside the Hofkapelle as well. Although some partitas have come down to us in choral setting, other sources suggest soloist performance. The greater virtuosity of the individual parts likewise lends credence to a version scored for soloist playing.

So where does the strength of these compositions lie? Let us hearken to the words of the master himself: ““Because the unrestrained composition, even if it is apt as well to tickle the ears of the layman, will in no way ever satisfy the refined taste of the cognoscenti, because the latter demand not only a successful idea, but compliance with laws as well.” The appeal to the connoisseur without disregarding the amateur is the distinguishing characteristic of Fux’s compositional style. Even after many repetitions during rehearsals we were astonished at the skill with which Fux unites both harmony and melody in homophone and counterpoint compositional technique and always retains the correct sense of proportion. Not one note is too many, nor a note too few. The beauty is universal and lies in the interaction all the factors participating in the musical expression. (Gunar Letzbor in the linernotes with the CD)

Thanks for you comment, we will keep it in mind if we will repress the cd! Challenge Records