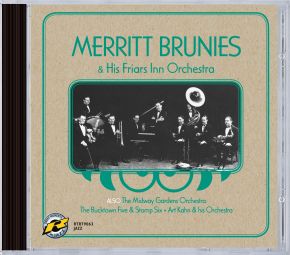 Merritt Brunies. Cornet, trombone. Member of legendary New Orleans musical family. Merritt Brunies was a traditional jazz bandleader in New Orleans and Chicago from 1916 - 1918, and headed a grroup called The Original New Orleans Jazz Band. This group did not record, but it predated Jimmy Durante's New Orleans Jazz Band which was formed in New York in 1918, and The Original Dixieland Jazz Band, which played in Chicago in 1916 and became the first group to record in 1917. After his first group disbanded, Brunies played cornet and led the ensemble that replaced The New Orleans Rhythm Kings  at Friar's Inn in Chicago. The New Orleans Rhythm Kings (NORK) were the finest jazz group to be on record in 1922, and the white band has served as proof that, even that early, African-Americans were not the only ones who could play jazz with individuality and integrity. Brunies returned to New Orleans in 1930 and played in various clubs. Brunies relocated to Mississippi in 1946, and played in The Brunies Brothers Dixieland Jazz Band for the rest of his career. (source:allmusic.com)

Merrit and Henry Brunies were members of a famous New Orleans musical family from the Irish Channel district of the city. Merritt got his start in the family band, playing on the front porch and on street corners. By 1918 he was leading his Original New Orleans Jazz Band with Emile Christian on trombone, playing in the tango belt, an area of cabarets and dance halls surrounding the red light district. The band was also known as the Brunies Brothers Band which indicates that from time to time one or other of his brothers also played with the group. After some years of playing in the night spots of the city, Merritt, together with brother Henry left for Los Angeles in 1923 to play at the Dome Dance Hall with New Orleans drummer Aneglo Schiro. Research by Lawrence Gushee has uncovered the fact that both Merritt and Henry Brunies deposited their transfers in the Los Angeles union local in late 1920, which may indicate that an earlier trip was contemplated or undertaken before the Schiro engagement. When the Schiro band broke up the brothers moved on to San Francisco to play at the Palais Royal Café with Chris Mann’s Band. Whether the New Orleans Rhythm Kings trombonist, youngest brother George Brunies had anything to do with the engagement of the Chriss Mann Band is conjectural but is is understood that he recommended the group to Fritzel. At the end of the Mann engagement Merritt formed his own group to continue playing at the Friars Inn and it is this group that made the records presented here. The band played there for around two years, but Merritt continued to lead after that and in October 1926 the El Patio Ballroom in Los Angeles contacted him at the Cinderella Café in Chicago to say that they were looking for a replacement band for December or January. Also, at one time he took a band down to New Orleans with the young clarinettist Danny Polo in the personnel. However, by the late 1920’s he had returned south, settling in Biloxi, Mississippi, where in addition to his musical activities he served in the Police Department. (source: part of the linernotes with the cd, written by Chris Ellis)

Please can you tell me why I, as a mail order dealer in the UK, cannot get hold of this album to sell to my customers. I am getting quite a number of orders but I have been told by Proper Music Distribution that they know nothing about it and have no idea when it will be available. It seems very silly that I can order it through my American wholesaler but not through the British one! This is not the first time that this has happened with your releases and even when an album is allegedly available, (e.g. CR73298 - Dick Sudhalter) Proper never seem to have stock which is extremely frustrating and reflects very badly on your company.
If you are unable to supply Proper Music Distribution maybe it would be more efficient and quicker if you could supply me direct.
I look forward to hearing from you.
Jerry Brown