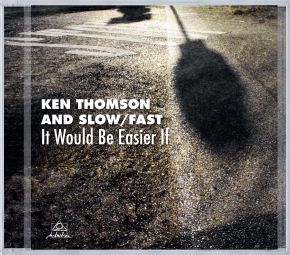 It Would Be Easier If

Time Out/New York called him "The hardest-working saxophonist in new-music show business". Not without reason: Ken Thomson, co-founder of the successful band "Gutbucket", has also composed numerous songs. His latest project is "Slow/Fast". Thomson, who has followed the tradition of John Zorn and taken it further, selected a few of the best in the business for his band.

The collective experience was necessary to understand, play and interpret the compositions on "It Would Be Easier if" and use them as a basis for individual improvisations. Extensive, complex arrangements, which first seem to have been composed for a larger ensemble, are celebrated by the sextet with unbelievable fullness and concentration. Thomson calls the concept "21st Century Third Stream", which really often sounds like a classical chamber ensemble, but which also includes sounds and melodies that only are appropriate to our century. The music has already been performed in several festivals in the USA (Bang On A Can Summer Festival, Northside Music Festival, etc.) as well as in John Zorn's club "The Stone", and the project is also coming to Europe in 2010/11.