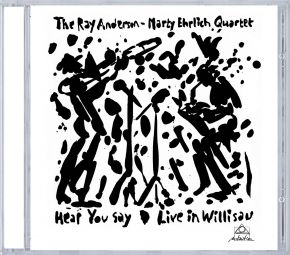 They have known each other for more than 30 years ago when they played together in Anthony Braxton's band: Ray Anderson and Marty Ehrlich. However, both worked on their separate careers after that, even though their paths crossed repeatedly, including on stage or in productions of John Lindberg, Christy Doran, Bobby Previte and others. They finally started their own quartet now, with which they have been touring worldwide since 2009.

Ray Anderson is considered the trombonist with the best technique of his generation, and – which is a lot more important – he is also the most versatile and imaginative one at the same time! He has taken very different projects such as "Slickaphonics" and "BassDrumBone" to success, and many from Dr. John to Henry Threadgill have asked him to participate in concerts and recordings.
On the other hand, Marty Ehrlich is unbeatable as musician playing several instruments: saxophone, flute and clarinet. A comparison with Eric Dolphy (The Village Voice) is totally understandable. It also applies to him that melody is the starting point despite all of his technical brilliance. It is not surprising that he is just as much in demand as composer as musician (he can be heard on almost 100 albums!).
Brad Jones is the perfect bassist for this quartet: flexible, lots of experience in music, without technical limits and without blinders to other music. He has long since proved this as bassist for Don Byron and Dave Douglas, among others.
Matt Wilson rounds out this real "All-Star Team". He is a very important figure in today's jazz scene. Regardless of whether with Joe Lovano or John Zorn, Wynton Marsalis or John Scofield, when he sets the beat, everything goes well. At the same time, his own quartet is "one of the best working bands in NYC" (NY Times).

In spite of all of the joy of innovation that the quartet has, the program has an unmistakable relation to one of the sources of today's jazz: New Orleans! But as little as time stands still and things change, the music is that little a retrospective. Quite the opposite. Bebop phrases appear here, Klezmer melodies there, it is funky at times and then everything is steeped in blues. The quartet very obviously has lots of fun playing (not only) on stage, and the audience senses it. That was also the case in Willisau; resounding applause and standing ovations prove that the Ray Anderson/Marty Ehrlich Quartet has reached the ears and hearts of audiences.

Niklaus Troxler, artistic director of the festival in Willisau and world-renowned graphic artist, designed the cover especially for this CD!

Dear John,
Thanks very much for your information, that's great!

hello,i thought i should let you know i am featuring ' hear you say' on my radio program at rtr fm perth australia.please keep me informed regarding your releases.regards,john obrien