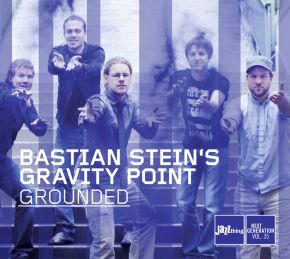 Bastian Stein was born in Heidelberg into an artist and musician family, but grew up in Vienna where he still lives today. He was already allowed to audit classes at the University of Music and Performing Arts, Vienna, when he was 10 years old, and he began his trumpet studies there when he was 15. He continued his studies in Amsterdam for several years where he studied under Ack van Rooyen, among others. In 2005, he received a New York scholarship as prizewinner of the Hans Koller Prize, and he had one year of private lessons from the internationally renowned trumpet instructor Bo Nilsson in Sweden in 2006.

With such a solid education from childhood, it is obvious: this young man has no limits with respect to technique. Individualism and creativity in music developed over the years while he toured with various bands, including a longer time in the German Jazz Orchestra under the recently deceased conductor Peter Herbolzheimer, who said that he had "an outstanding gift for composing" and "an outstanding degree of artistic creativity".

Consequently, the band members playing with Bastian have to meet high demands, and they do this brilliantly. There are also prizewinners among them. Peter Kronreif was recently awarded the Hans Koller Prize as Newcomer of the Year 2010, and Matthias Pichler has already won a whole slew of prizes. Philipp Jagschitz is a pianist very much in demand in Austria, resulting in a very solid and multifaceted rhythm group. The classic jazz quintet is complete with Christian Kronreif, former student of Harry Sokal and Alan Praskin and a solid member of the Austrian jazz scene in the meantime.

"I often thought of the musicians during composing and how they would interpret my music. As a result, the pieces have been inspired to a great extent by the way the musicians play," Bastian Stein said. You can't not hear it; as a result, years of mutual stage experience are combined with a good portion of harmony and identification with the music.

All the compositions on "Gravity Point" are Stein's own (besides one of Peter Kronreif and one of Philipp Jagschitz), which are characterized by a far-reaching understanding of harmonic and melodic developments. Nothing sounds forced or as if someone were trying to be original, but instead comes as a matter of course as a mature work, unexpected given the youth of the leader and his band. The arrangements are characterized by clear beauty, which radiate a kind of joyful melancholy. Bastian uses the voice of Angela Maria Reisinger more or less as another instrument in two pieces, in that he composed vocalizing phrases as third voice for her.

"Bastian Stein is one of the most interesting young jazz musicians in Austria. With his marvelous sound, always tasteful, and already with a surprising maturity as a soloist, he has long since passed the stage of being an upcoming talent," according to the trombonist and teacher Robert Bachner.