The code is valid one time and valid for a 10 days after receiving the promotioncode. Your emailaddress will only be used by Challenge Records International and will not be given to 3rd party advertisers. If you have any questions please contact us.
TITEL CD is added to your cart.
1340976381 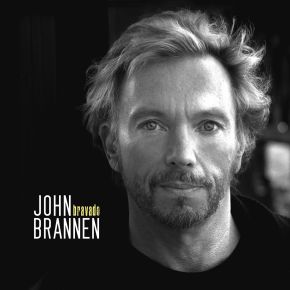 Defining John Brannen's place within the pantheon of American music is no simple task. His journey has taken him to nearly every music capitol—New York, Nashville, Memphis, Muscle Shoals, Los Angeles—and his work draws on all their traditions without settling in any. “I’m a Southern American artist,” he has said. “I feel capable of making a bluegrass record and I feel capable of making a jazz record, but what I do is out of the essence of rock ‘n’ roll with Americana, soul and blues influences.”

The success of that approach is everywhere in evidence on his latest album, Bravado, his third for Sly Dog Records and his sixth overall. Bravado finds Brannen doing what he does best—channeling a segment of the American psyche. Given the complex nature of 21st century life and the detail and nuance Brannen brings to his work, Bravado is, not surprisingly, a project with real weight and scope.

“It’s a record about survival,” he says, “about putting the best face on desperate times, accepting tragedy and loss, but moving forward with a glimmer of hope and mystery. It deals with the struggles most of us are going through in terms of trying to hold on to a place where we feel safe. The essential definition of bravado is pretended courage, and all of these songs are, I think, reflecting people who are trying to exhibit some sort of desperate bravery.”

As always, his take is literate and organic, displaying a poet’s facility for building meaning and emotion one phrase, one image at a time. From the CD’s first song, the hard-driving “Raised A Rebel,” we are reminded that Brannen views the American experience through a distinctly and proudly Southern lens.

Bravado looks unblinkingly at hope and heartache. “The Messenger,” which falls musically somewhere between Dylan and Booker T, and “Anywhere But Here,” with its classic feel and passionate vocals, explore dissatisfaction that can reach the most profound levels. The Stones-ish and bluesy “Dog Wants In” and “I Could Be Persuaded” deal with the power of restlessness and temptation, while “Still In The Game,” with its anthemic echoes of Springsteen, celebrates the pure redemptive power of the human spirit as it wills itself toward the light. The project’s one cover—a hauntingly powerful version of Gram Parsons’ iconic “Hickory Wind,” serves double duty, softening the hollowness of success markers even as it serves as a touchstone for much of Brannen’s work.

“I can remember where I was standing when I first heard Gram with the Byrds on Sweetheart Of The Rodeo,” he says, “and that record kind of opened a connection to a large spectrum of country and other music that wasn’t open to me before. David Z worked and wrote with Gram, so we had another connection there.”

Brannen nails it all down with the album’s final song. “‘Between The Concrete And The Moon’ exemplifies hope in times of desperation,” he says. “I think people need to grasp something of where they have come from in order to be prepared for a future that cannot be foreseen at all. They want to hold on to the things they recognize that were good about the past.”

Both “Between The Concrete And The Moon” and “Name Of The Room” allow Brannen and the top-flight musicians accompanying him to stretch out musically, something that fits Brannen's production style.

“This is a jagged record sonically,” he says. “It’s raw. It’s conversational. I never set out to create art. I set out to identify emotions and if all goes well something emerges that hasn’t been apparent. It’s something like throwing a sheet over a ghost and finally the ghost has a form, something we would not have seen otherwise.”