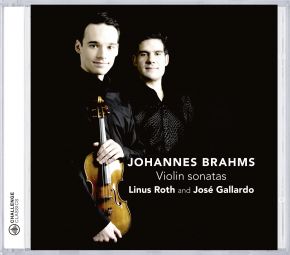 Like the Second Symphony the music of the First Violin Sonata clearly reflects the feelings of well-being and relaxation, with its lilting melodies and heartfelt middle movement. The premiere in Vienna on 29 November 1879 was an immediate success that lasts until this day. Like in all three sonatas the violinist makes his dominant appearance, but he frequently leaves the lower sonorities and harmonics to the piano accompaniment. In this perfectly balanced masterpiece there is plenty of virtuosity laid out for both players.
In the Second Sonata there is again the melodic mellowness, tenderness and expressive warmth which already dominated the First Sonata, but the thematic structure is more concise, with textural references to three songs Brahms composed during that same period: Komm bald, Wie Melodien zieht es mir and Immer leiser wird mein Schlummer.

The Third and last Violin Sonata was written in 1887 and again inspired by the breathtaking scenery surrounding Thun. Unlike the previous two sonatas it has four movements and was premiered in Budapest in 1888. This time the intimacy of the first two sonatas is surpassed by the grand symphonic scale of the music. (source: linernotes written by Aart van der Wal)

Roth and Gallardo, a duo for many years now give exquisite interpretations of these sonatas, with equally important roles. The result is utmost unity and beauty!

Hello. I would like the hi-res download advertised on this page. But there seems to a problem accessing it - only the itunes link works for me. Grateful for any assistance.