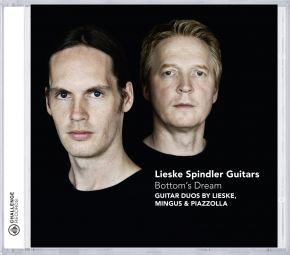 Lieske Spindler Guitars was founded in 2009. For the 150th birthday of Isaac Albéniz, the duo recorded the CD “Evocación” for Challenge Records with transcriptions of his piano works (CC72374). The guitarists had two legendary instruments by Antonio de Torres at their disposal for this recording. The Duo was rewarded with a Gramophone Editor's Choice for this breathtaking and ground-breaking 2-cd.

"Lieske and Spindler’s interpretations can be expansively orchestral in conception – try the opening “Evocación” from Iberia, the “Bajo la palmera” and “Oriental” from Cantos de España – or intimately lyrical ...and expressive, as in the barcarolle Mallorca...."

Spindler about the new, second album " Bottom's Dream":
"This isn’t about classical guitars, but about guitars per se. We chose the composers for this CD because Mingus and Piazzolla also orbited between several stylistic worlds. Mingus had a passion for Debussy, Ravel and Richard Strauss, while Piazzolla started his career in utter panic in case tango might be associated with brothel music. This balancing on the borderline was extremely fruitful for both of them. Nobody today would question how important these artists are."

Wulfin Lieske (composer)More information
01-10-2012 Classical Guitar
"The recorded sound quality is very good and these two virtuoso players get the best out of what is very good music."