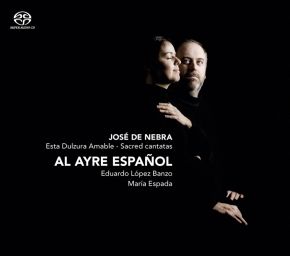 "In Guatemala City I discovered, among the hundreds of forgotten musical scores that make up the rich musical archive of its cathedral, the four cantatas that are included in this recording. But how had these pieces written by a Saragossan from Calatayud who, as far as we know, never left his homeland, end up here in the overseas Guatemala?

Roll back to the second decade of the eighteenth century: Nebra, already working at the time as organist and composer in the royal court of Madrid, was only twenty years old! He had acquired great fame as an author of stage music and wrote numerous songs for the royal chapel's religious celebrations. These pieces, characteristic of solemn sacred palatine ceremonies, travelled to America. But how?

In Guatemala, among the many documents that I had scrutinised, I read the story of a journey that an eighteenth-century clergyman of the Cathedral made to Europe: among others, in order to compile modern music that would later be played by musicians of the primary Guatemalan temple. In the trunks of that very canon, in all likelihood, these songs that I now present, travelled to America. Those, as well as other compositions by Nebra and some of the most famous masters of that era.

Our Nebra was, this explains everything, a prestigious composer. His persona stands out amongst an ancient dynasty of musicians: the Nebras, who worked primarily in the province of Zaragoza. But José (Calatayud 6-1-1702, Madrid 11-7-1768) reached even more fame and prestige. His music could be described as Italianised with a Spanish air, arises at a time when the Italian style conquered the European courts; a process that began around 1700 that would mark the future of western music. As far as Spain is concerned, the Italian fashion found its primary and most exalted ambassador in the very same Queen consort Elizabeth Farnese, second wife of Philip V. Throughout his reign, music was dominated by Italian masters: the most relevant being Domenico Scarlatti who arrived in Spain in 1729." (source: linernotes of this CD by Eduardo López Banzo)