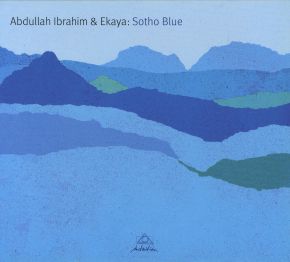 The term legend is used exceedingly in our prosaic times. But it is appropriate in every respect when we talk about the South African jazz pianist Abdullah Ibrahim. Then this giant of a man, who has not lost anything of his eagle-like sharpness despite being in the middle of his 70s, not only tells stories with his music, he also embodies living history. Abdullah Ibrahim emanates an aura of impregnable eternity.

Born as Adolphe Johannes Brand 1934 in Cape Town, he worked as a professional musician under the name Dollar Brand starting in 1949. The significance of that during apartheid in South Africa need not be explained here. Still, he stuck it out in his native country until the beginning of the 60s, performed with Miriam Makeba and founded the first noteworthy jazz band in Africa with the Jazz Epistles. However, international recognition also produced distrust in his country. He moved to Europe in 1962, performed above all in Switzerland and Denmark, and was discovered by Duke Ellington in 1965.

Ellington took Brand back to New York. He set off on a spiritual path on the side of Ornette Coleman and John Coltrane, which he has not left till today. He never broke off his close connection to Africa, but he also constantly sought alliances in Europe and Asia. Starting from 1968, his closest collaborators included musicians such as Don Cherry, Gato Barbieri and the legendary South African bassist Johnny Dyani. He converted to Islam in 1968 and took the name Abdullah Ibrahim, which slowly replaced the trademark Dollar Brand over the next decades. He was the foremost integration figure for African jazz in the 70s and 80s. The abolition of apartheid was also an act of liberation for Abdullah Ibrahim. He played at the inauguration of Nelson Mandela in 1994. He expanded the context of his African roots and American memories into a global experience with the reflective solo album "Senzo".

The band Ekaya is one of his long-term projects. Ekaya means homeland or hometown. In 1983, the band starting playing South African folk music and transferred its hymnic magic into the context of instrument jazz. The first album of the septet was simply called "Ekaya". The saxophonists Carlos Ward, Ricky Ford and Charles Davis were part of the band then. "Water From An Ancient Well" followed two years later with the same band members. The band members of Ekaya have changed completely since its founding, but not its spirit. "In each group, there is a continual process of interaction, which takes place in three stages: a few come, a few remain, a few go," according to the master. "Ekaya, native country, has become established as a kind of institution. Its center is a universal code; regardless of where you go, you remain at home."

Cleave Guyton (alto saxophone, flute), Keith Loftis (tenor saxophone), Jason Marshall (baritone saxophone), Andrae Murchinson (trombone) sound in harmony with drummer George Gray, bassist Belden Bullock and Ibrahim's unmistakable piano hymns like a choir of many voices. The pieces are originals from the past of Ekaya. The spirit is the same, but the attitude has changed. The past and the future flow together in the present for Ibrahim. The slogan "Back to the Future" is not something cool or mellow for him, but instead it belongs to the ritual basic equipment of his music. As a result, the recapitulation of these songs, some already 25 years old, has nothing to do with revisionism, melancholy or even self-importance as can often be heard from the old jazz heroes. Or, to put it in Ibrahim's words, "The new Ekaya provides us with the unique opportunity to question our past in order to plan our future."

Ekaya 2010 is more economical and minimalist than previous recordings of the band. The fight is finished; now it is a question of preserving memories and making something new out of them. The exuberant poetry of the songs has remained, but they have been set in a new historical context. Following the Soccer World Cup 2010, we listen to the songs in a much different way than in the 80s. Abdullah Ibrahim addresses a younger audience, which did not exist yet in 1985 and for whom apartheid was a cruel part of the past but which has been overcome. But still, “The deep inner significance of the old and the new will never change. It crystallizes precisely in this moment. The now and then are realized in an eternal sound."