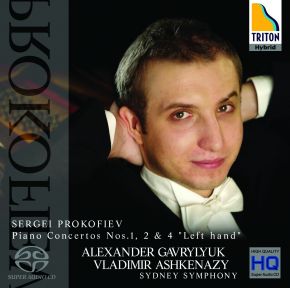 Prokofiev set about composing his Piano Concerto No. 1 in 1911 and in 1912 the work was finished. It is a one-movement concerto, and lasts around 16 and a half minute in the interpretation of Gavrylyuk/Ashkenazy.

In the same year 1912 Sergei Prokofiev began to work out his Piano Concerto No. 2 in G minor, Op. 16 which was completed in 1913. He himself performed this as a solo pianist, at the premiere  on August 23 in 1913. The concerto has quite a temperament and some people in the audience were taken by it and others firmly opposed to its modernistic sound. Nowadays people recognize it as the masterpiece which it is.

Sergei Prokofiev's Piano Concerto No. 4 in B-flat major for the left hand, Op. 53, was commissioned by the one-armed pianist Paul Wittgenstein and completed in 1931.

At his graduation competition, Prokofiev performed his first piano concerto because he figured he had a better chance of winning if the judges didn’t know the music (he was right!). In this program of the festival, Alexander Gavrylyuk takes the spotlight to perform this dazzling, bravura work. (source: Sydney Symphony Orchestra)

Underneath Prokofiev’s cheeky wit, sarcasm and brilliance was a romantic soul, which audiences will discover in his Third Piano Concerto the romantic Prokofiev shines through when Alexander Gavrylyuk joins Ashkenazy and the Sydney Symphony. Prokofiev was capable of lyrical and irresistible melodies. (source: Sydney Symphony Orchestra)

“In the end, he (Prokofiev) was just another human being who tried to express this in his music” - Vladimir Ashkenazy