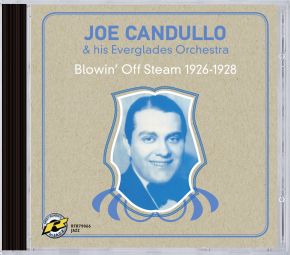 Joe Candullo and his Everglades Orchestra

Joe Candullo is a more or less forgotten name among American bandleaders of the 1920's. But in a comparatively short career he made some very interesting sides of considerable jazz value which deserve to be better known. A listen to this CD would be very rewarding.

The explosion in popularity of jazz-oriented dance music in the years after the First World War permeated all levels of society and entertainment media. Theatre, vaudeville, burlesque, cabaret, and night clubs all featured bands and orchestras playing jazz-inflected music to a greater or lesser degree. Among the thousands of such musicians was a young violinist by the name of Joe Candullo, whose band in the 1920s was typical of the groups providing music for cabarets and nightclubs, but at the same time remarkable, both for the quality of the music and the repertoire they recorded.

When examining the recorded output of Candullo’s band, what stands out is the preponderance of ‘hot’ titles – not just standard popular songs of the day given a jazzed-up treatment, but compositions normally associated with out-and-out jazz groups – and many of them historically associated with black bands.