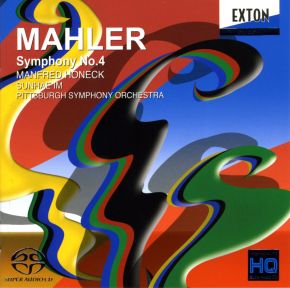 Manfred Honeck’s remark on the Mahler’s 4th symphony (from CD booklet): Mahler's Symphony No 4 is especially dear to my heart as although this work has a neo-classical structure and, due to the reduced orchestra size, offers a seemingly simple and naive sound world, on closer inspection it seems even more enigmatic and grotesque than Mahler's previous symphonies. The interplay of the eerie and the idyllic, that famous Mahleresque ambiguity, leaves its distinctive stamp on this symphony like on none of the others composed earlier.

My starting-point for the understanding of this work is the fourth movement which was originally intended as final movement for the third symphony and hence was written a few years earlier. Originally, Mahler had given it the title "What the child tells me". The description of life in paradise is interrupted by biting, razor-sharp figures. You might possibly perceive these passages as faster than usual but actually Mahler himself explicitly demanded in a footnote a faster tempo than at the beginning of the symphony. Accordingly, the grotesque is supposed to sound even more demonic and the idyllic even more innocent and childlike. For this reason it was also of great importance to me to choose a soloist with a notedly lyrical and childlike voice (it is, after all, "The YOUTH's Magic Horn") in order to corroborate this innocence and purity.  I think I found her in soprano Sunhae Im.

The second movement likewise lives on this interplay. Altogether, I did not consider it necessary to have the solo violin (called "fiddle" by Mahler) play even more grotesquely as the instrument is already tuned a whole tone higher than standard, but it was important to me to highlight elements such as the dance parts borrowed from traditional Austrian folk music with their typical offbeats and short standstills.
A further challenge for me was the rubato playing which is an essential ingredient of Austrian folk music and which is essential to me for the performance of Mahler's music. This work demands a special measure of rubato playing similar to the music of Johann Strauß.

For me this symphony, requiring a combination of chamber music discipline and orchestral virtuosity with the earthiness of folk-music and surprisingly classical form, unites central European traditions stemming directly from spirit of Joseph Haydn. (by Manfred Honeck)