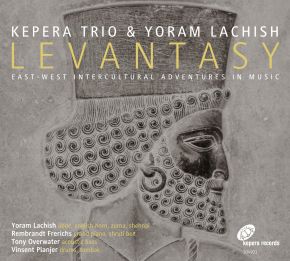 The Kepera trio was formed when its members discovered they shared an interest in the music from the Middle East, particularly the Arabic and Persian traditions. Rembrandt Frerichs lived and worked in Cairo for a number of years in his early twenties, soaking up the cultures and sounds of the orient. Tony Overwater has played with many musicians from the region and consequently visited the Levant on numerous occasions. More recently, Vinsent Planjer, through his studies of the Persian Tombak, discovered the warmth and improvisational expressiveness of Persian music. Rooted and educated in the rich history of jazz (all three hold a master’s degree in jazz, obtained from the Royal Conservatory in The Hague, Holland), they wondered how to materialize their shared passion. They quickly found a fourth collaborator in Yoram Lachish, who possesses the same mix of talent, training and ambition. Born and raised in Israel, he spontaneously absorbed the fusion between eastern and western cultures manifested in Israeli daily life and culture. Classically trained on the oboe, he later developed an improvisational style, making him one the few oboists in the world to successfully improvise on their instrument and making him a perfect fit for the Kepera trio. This became Levantasy. In the music the members of Levantasy attempt to incorporate the sounds and concepts of middle Eastern music into what’s essentially a jazz environment, never losing  sight of the ultimate goal, which is to create things of beauty.   Although it is tempting to interpret the seemingly effortless mixing of Arabic, Persian, Jewish and western styles as a metaphor for the search for harmony among the peoples of the Middle East,  the project does not aim to carry a political message. However, if the music would inspire the listener, at least momentarily, to forget the politics and appreciate the boundary-breaking power of art, Levantasy would consider that to be a mission accomplished.