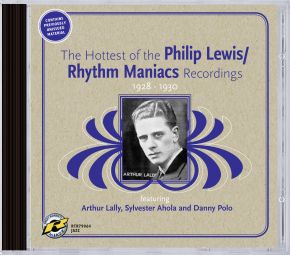 The Hottest of the Philip Lewis/Rhythm Maniacs Recordings

When stockbroker Edward Lewis (later Sir Edward Lewis) founded the Decca Record Co Ltd in February 1929, he set his sights on delivering a top quality product featuring the best artists across a wide range of musical genres – from the classics to dance music. Despite initial technical problems and tough times due to the Depression in the early 1930s, the company prospered under Edward Lewis' guidance. While other independents floundered and went out of business in the 1930s – or were sucked up by the EMI colossus – Decca alone maintained its independence and eventually grew to rival even EMI, taking over American Brunswick in 1932 and Crystallate (makers of Imperial, Eclipse, Rex and Crown records) in 1937.

The first dance band record Decca issued (on its premium Magenta-coloured label) was by Ambrose and his Orchestra, which at the time rivalled that of Jack Hylton as the country's top dance band. Decca also decided to set up its own house band, similar to The New Mayfair Dance Orchestra at HMV, and Bert and John Firman's various aggregations at Zonophone. The latter included The Rhythmic Eight, a group that played uncompromisingly hot music, and which has been the subject of an earlier Retrieval reissue (The Rhythmic Eight - 48 of the Best; RTR 79059).

As with The Rhythmic Eight over at Zonophone, the jazz-flavoured sound of the Philip Lewis/Rhythm Maniacs sessions owed much to saxophonist Arthur Lally, as Sylvester Ahola, the trumpet player on these early Decca sides, recalled many years later: "Arthur Lally was the brains, and a very fine musician. Arthur used a similar personnel at Decca to that at Zonophone and we all just naturally played in a similar fashion. He took all the baritone solos, but he also played lead alto and sometimes tenor sax". (source: linernotes by Chris Ellis)